Finland – a country of contrasts

Finland is mistakenly considered to be part of Scandinavia, which only includes Norway, Sweden and Denmark. Actually, until now I thought that Finland also belongs to Scandinavia and that is why I was so surprised because in no way (apart from the natural environment and prices) it does not resemble Sweden, which I’ve recently visited. Finland impresses with its landscape, which is, however, monotonous – 74% of the entire country is covered by forests, located on over one hundred and eighty thousand lakes. Only 5.5 million inhabitants live here, they speak Finnish and Swedish, the delicacy is fried reindeer and the prices are even higher than in Sweden!

I have been traveling on business around Europe for several months. Back in April, I wrote about my impressions after arriving to Sweden, in June I visited Poland, about which I also wrote one article for my colleagues, who are all Spanish and had never been to Poland before (translation on its way). Now it’s time for Finland, which from day one has surprised me at almost every step. Why is it, in my opinion, a country of contrasts? 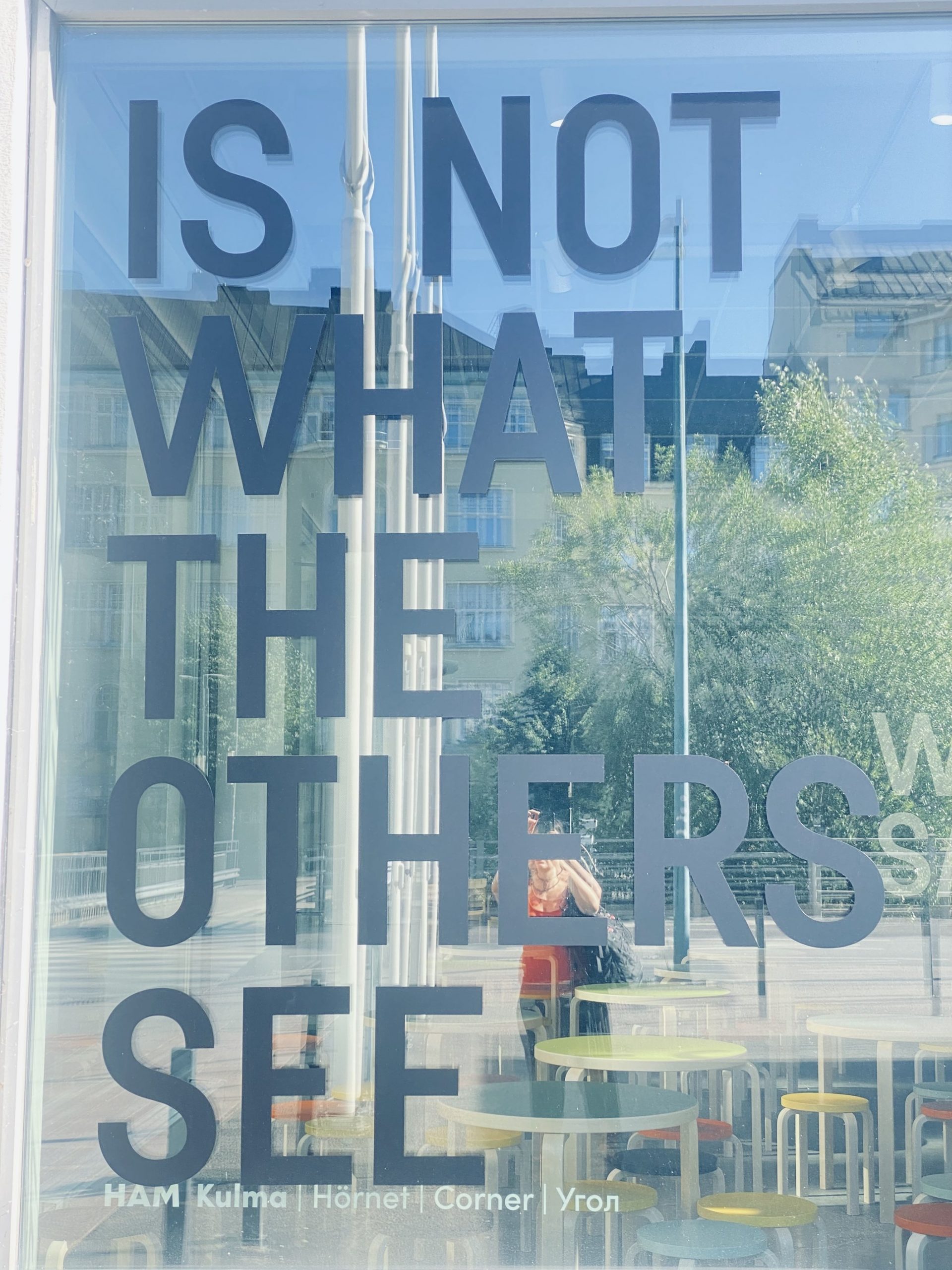 I started my stay in Finland from its capital and already there I experienced some kind a shock. The city itself is small and, frankly speaking, not very interesting. In one day you can easily “pass” all the most important attractions. In terms of architecture, Helsinki reminds me a bit of Warsaw or Berlin from the 1970s and 1980s. While walking around the capital, we can observe a cross-section of various architectural styles, but still we would be overwhelmed by the post-communist, gray brutalism (which, however, has something charming about it). But what surprised me the most? I must admit that for the first time in my life I haven’t prepared myself for the trip. So I was expecting something similar to Sweden. Stockholm is majestic, beautiful, clean. People on the streets are dressed not only neatly but above all well and stylishly. You don’t see too many homeless people, begging or picking up cans. I also haven’t seen many people drinking alcohol in the streets. In Helsinki we have a little bit of everything like on Bahnhof Zoo. Someone is sipping booze from a paper bag, someone is sleeping on a bench and another just on the sidewalk, someone is collecting cans, bottles and cigarettes butts, someone else is begging for money. It’s dirty.

That was my first impression. I have to admit that Helsinki shocked me a bit because I was expecting something different (my fault). So I started to look more and more closely and analyze more and more deeply the Finnish reality that surrounds me.

The Finns look as if they just didn’t care and as if everyone gets dressed at the local market. I’m not saying it’s a bad thing, but it’s definitely surprising, because usually, in any society, there is a certain variety in terms of clothing. In Finland, there actually is some variety, but it is a bit different – the vast majority has a style like my grandmother in the People’s Republic of Poland (everyone from young, through middle-aged to old people). A lot of people wear heavy metal black clothes. Then we are left with the percentage of “freaks” – colored hair, men in women’s clothes and exaggerated makeup, people in outfits designed by themselves. Summing up – Sweden looks a bit like a giant Ikea filled with people dressed in accordance with the latest fashion trends. Finland looks a bit like a small Russia – which, as we know, is not a country, but a state of mind. Finland was a part of Russia until 1917, so maybe it shouldn’t shock me that much? 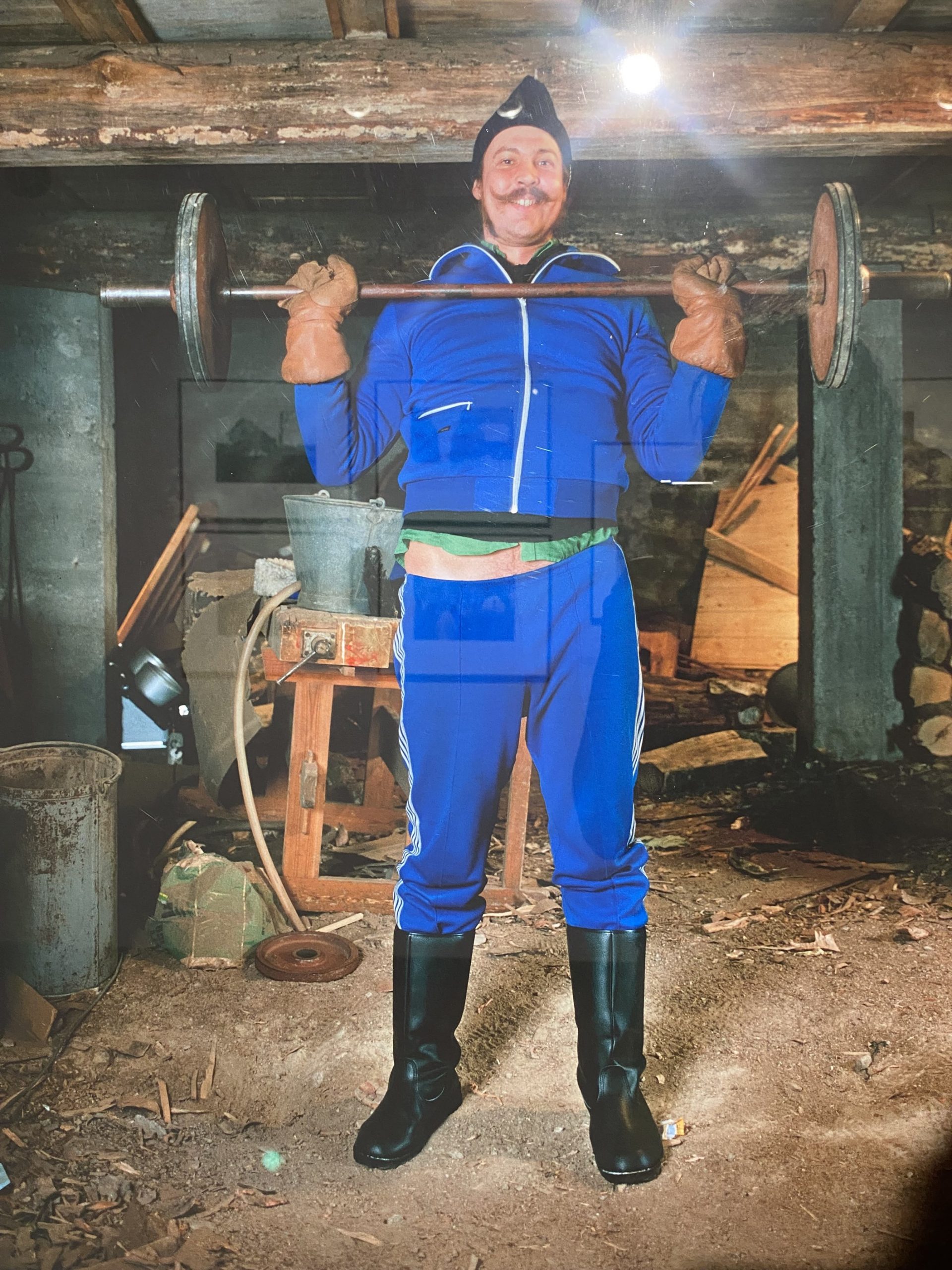 Apart from the fact that they dress as if they didn’t care (which actually is fine with me) they are really open minded. I heard they are cool, distanced and aloof, but so far my experiences are completely different. They seem very direct. I went to an open-air concert and someone started chatting with me right away, as I was alone, proposing me to join a group of his friends. This is how I made my first Finnish acquaintances (apart from one painter and one nursing student who looked like a young, super skinny Axl Rose, I met two monks and one priest who had just come to visit because he is stationed in Turkey on a daily basis). I asked them why Finland was so expensive and yet society seems to be poor rather than rich. Everyone agreed that it is not expensive for them and they simply do not pay attention to prices. Of course, there are poor people in Finland, but I guess a great part of society just looks poor even though they can’t complain about low standard of life. I have heard many times that in Finland people are depressed and it is the country with the highest suicide rate, and it turns out that for the last four years it has been ranked first in the ranking of the happiest countries in the world. So what is this all about? 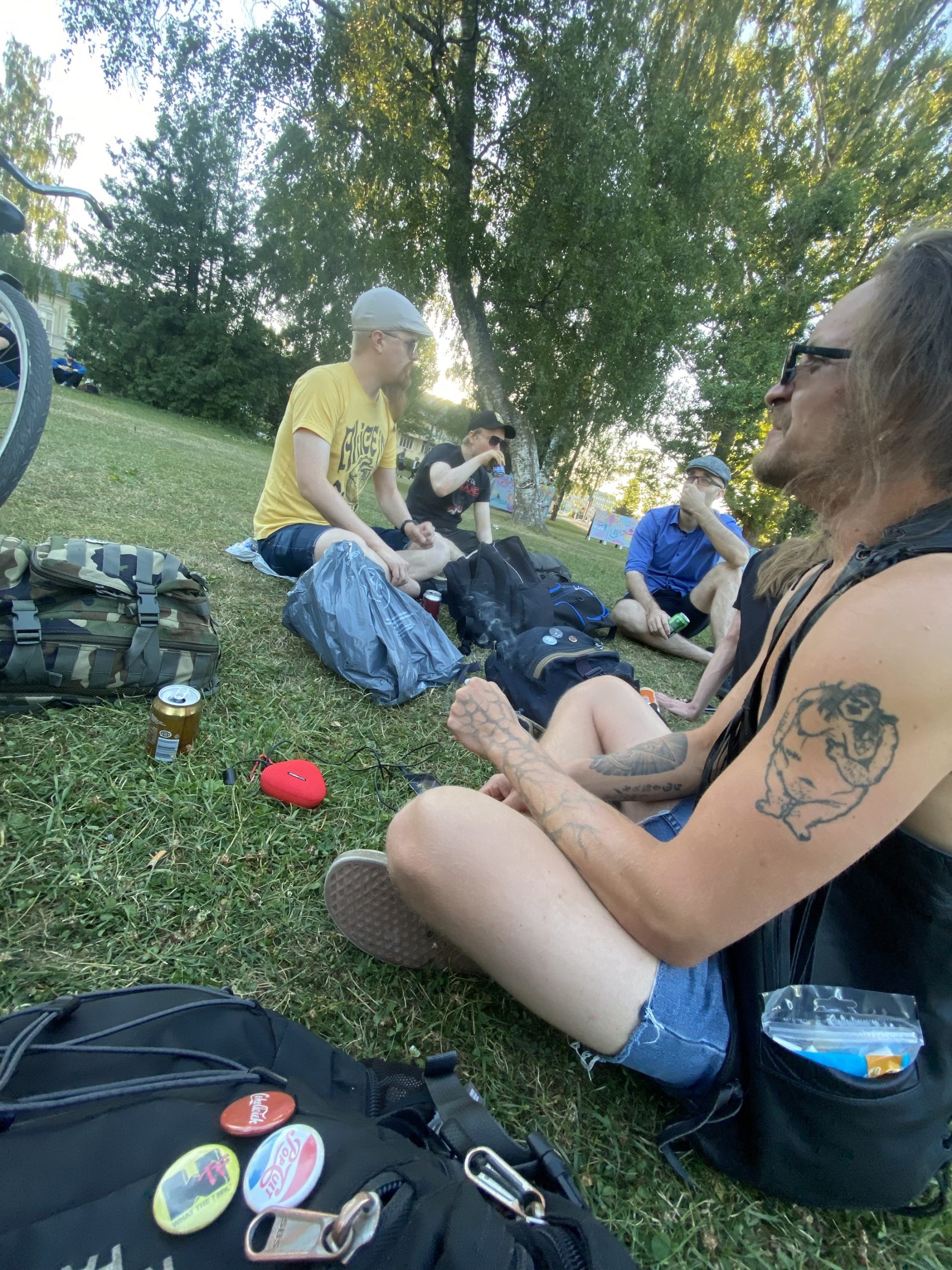 We all know that in Finland they have to deal with severe winters and a lack of sun most of the year. There is one expression in Finnish which loosely translates to “one who smiles for no reason” and it is not a compliment. It all suggests to us that we are not dealing with someone satisfied with life. The Finns themselves were shocked that they are such a happy nation! What factors are taken into account in the annual survey? GDP per capita, social support, life expectancy, freedom to make life choices, generosity and level of corruption. Finland is doing great in all of them.

In Finland, education is free and at the highest level (in the Pearson report on the level of education in the world, Finland was first, Poland was the fourteenth, UK 6th, USA 17th). The government also provides students with one hot meal a day and textbooks and study materials in junior grades. Finland was recognized as the most literate nation in 2016 and the safest country in the world according to the 2017 World Economic Forum report. So it looks like the perfect place to start a family. In addition to free education, Finland also provides its citizens with free health care and, from what I have heard, not only free but above all at a very high level.

If you are interested in the subject of education, I recommend reading the following articles (in English)

When it comes to the cost of living, according to all the websites for students, we will need around 700 € – 900 € per month for a modest life (survival). Of course, it also depends on the location (Helsinki is the most expensive, for a month we will need € 980 – € 1.580 including accommodation costs) and our personal needs. You can find an example of average prices in Helsinki here

Besides, Finns, like Swedes, love to spend time outdoors, which doesn’t surprise me as in the northern region of Finland, Lapland, air is the cleanest in the world. They usually choose walking, hiking, biking, canoeing. Due to the fact that so few people live in a fairly large area, everyone can enjoy the wildlife. When it comes to winter, it probably only scares us – foreigners. The Finns themselves admit that they have learned to live with the seasons and winter is not a limitation for them – even in freezing temperatures, they jump on their two wheels and pedal with pleasure. And then there is a whole range of new possibilities – ice skating, skiing or dog sleds! In national parks (of which we can find as many as 40 throughout the country), we often have free access to the sauna and we can camp for free in designated places. If, for example, we belong to a canoe club, we can rent kayaks for free.

If you are interested in the topic of jobs and earnings, I encourage you to take a look here –  and here; you will learn, among other things, how many days of vacation Finns are entitled to, how many hours a week they have to work, what is the average hourly rate, how much is earned in various professions, industries or even cities.

Apparently, we can find 2 million saunas in Finland. Currently, almost every house, apartment, hotel or even office building has its own sauna. To really enjoy it, after warming the body to the proper temperature it is necessary to jump into the icy cold water (winter swimming is also quite popular in Finland), bask in the snow or simply take a cold shower. We enter a traditional Finnish sauna naked, completely without clothes, and we should not be ashamed. In Finland, nudity is not a taboo subject.

As in Sweden, in Finland we are dealing with partial prohibition. We will not buy stronger alcoholic beverages in every supermarket, but only in special stores simply called Alko. Fortunately, we can buy regular beer in any store, not like in Sweden, only one whose strength does not exceed 3.5%. Unfortunately, the prices of beer are lethal (and so are of any alcohol in general). Finns are known for their love of drinking, which is beautifully summed up by their national saying – “a drop will not kill you, and you will not drown in a bucket”. When it comes to the annual consumption of pure ethyl alcohol (100%) per capita, Finland is not very high in the ranking (for comparison – Poland is on the 20th place, Spain 39th, Finland 32nd). However, drinking alcoholic beverages is still recognized as one of Finland’s health problems. Regarding drugs, opinions are divided – on the one hand, recent studies show an increase in drug use during a pandemic, on the other hand, it is still reported that the statistics are not disturbing.

Speaking of health problems, just a curiosity – over 50% of the adult population struggles with overweight. 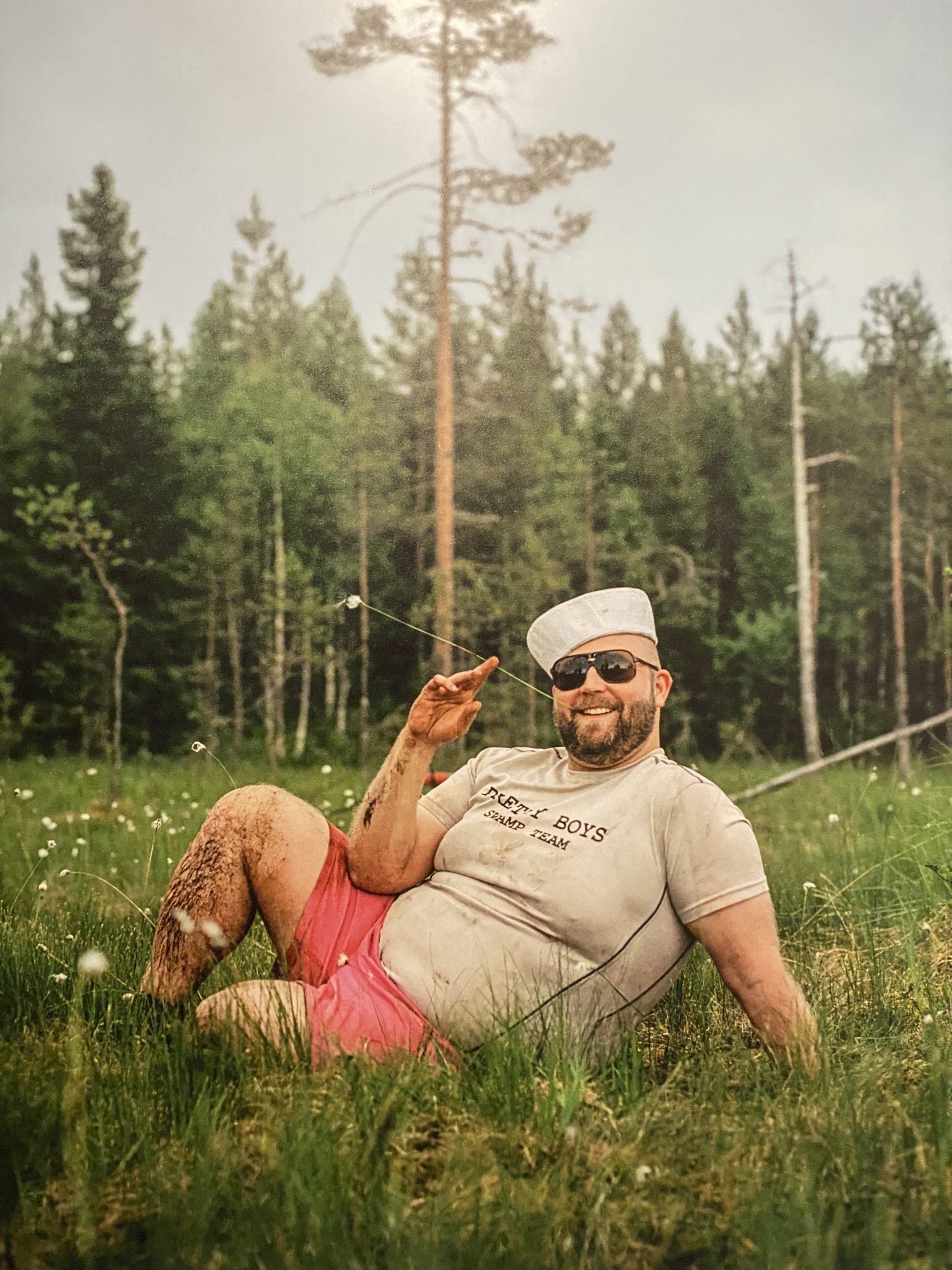 This is a real problem. It is not similar to any language, perhaps a little bit to Estonian, and has a further relation to Hungarian. Contrary to Polish, where, as my Spanish friends have noticed, the words are dominated by consonants, Finnish has an excess of vowels. I was surprised that we have as many as 15 cases in Finnish. Besides, Finns love to connect words, just like Germans. Officially, the longest Finnish word is epäjärjestelmällistyttämättömyydelläänsäkäänköhän, which has a rather abstract meaning (you can read about it here) 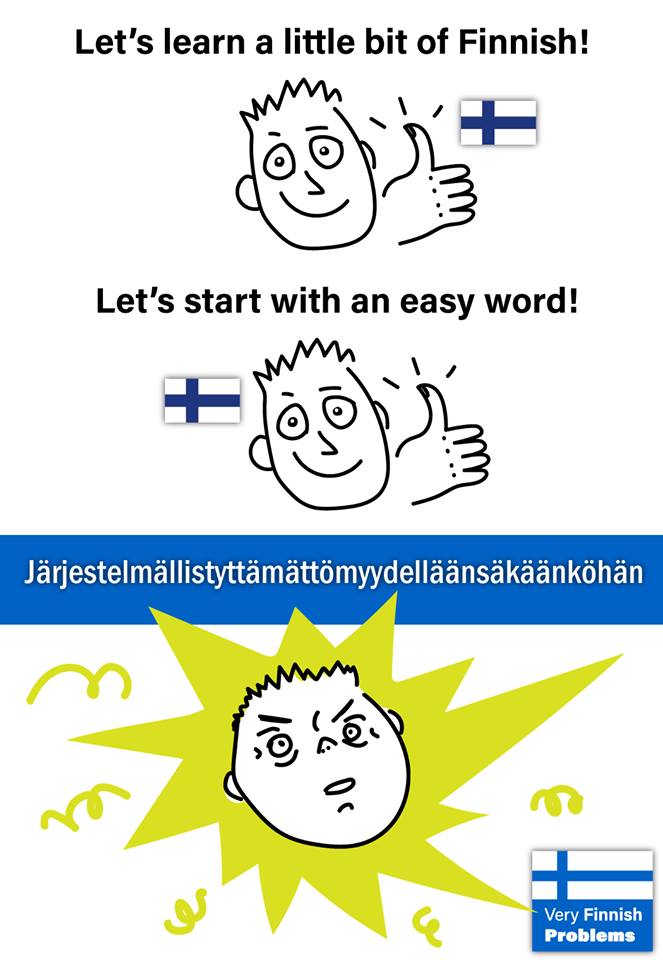 Although forests cover most of the country’s territory, the forest industry is only in third place, after metallurgical and chemical industries. The IT industry is very developed in Finland and we probably all remember the immortal Nokia phones, which also come from Finland. Apparently, Nokia has also released rubber wellies on the market, with a similar lifespan to its legendary phones.