Sweden – myths versus reality: what surprised me and how was it related to the ideas that I had created in my head basing on information read on the Internet and previously heard from friends

Today I am going to share with you my first impressions from Sweden, which really surprised me positively! It seemed to me that I was going to a very distant, cool (not only because of the weather) and expensive place. It turned out that Sweden is an individualistic country, extremely exotic when it comes to mentality, safe, after all not so expensive and, above all, completely ignoring COVID. If you want to know what exactly surprised me – continue reading!

First of all, the prices surprised me. I heard earlier that Scandinavia is very expensive and when I arrived, it turned out that all the fear that was building up in me before my arrival was completely unnecessary. Sweden is maybe 20-30% more expensive in some aspects than Spain, where I live every day, but on the other hand it does not differ much from France, where I spent the last month. Well, even some things are cheaper here, and yet the Swedes earn a lot, as far as I know, really a lot – so it’s not surprising that we see so many smiling people on the streets who simply do not have to worry whether they will have enough money to survive until the end of the month. Somthing that in Poland, until not so long ago, was something quite common and in Spain it happens more and more often. The pictures below show examples of prices – to convert to EURO, we divide the price in SEK by 10.

The only thing that seems significantly more expensive, at least until now, is alcohol. First of all, it’s available in every shop. In the supermarket we can only find beer and other drinks, the strength of which does not exceed 3.5%. Apparently, there are special stores where we can get stronger alcohol, but I have seen only one until now, in the shopping center. I do not know if they are well camouflaged, I know that they are not noticeable in any way and you probably have to struggle to get to one of those a liquor stores. However, they do have a huge selection of non-alcoholic beers – in no other country have I seen so many brands of non-alcoholic beers (and wines!). When it comes to prices, a 0.33l bottle of Heineken, Carlsberg or Staropramen in a supermarket costs about EUR 1.3. The cheapest beer I found was 6 cans of 0.5 l, 2.8% for 2 EUR – that means we would pay a little over 0.70 EUR for 1 liter. In Spain, we can buy good beer for 1EUR / 1L but price that low is even there quite rare and uncommon. On the other hand, I do not think that the Swedish beer price is very high – it was very similiar in Corsica. The real surprise, however, is the price of beer in bars and restaurants. During my first day in Sweden I ate a pizza for EUR 9 and washed it down with a half-liter mug of my beloved Czech Staropramen for … EUR 7! Besides, I can finally buy a half-liter beer which in Spain, France or Portugal is totally uncommon.

As you all know, there have been hardly any steps taken against COVID in Sweden. After well over a year of a pandemic, quarantine, curfew, it is an amazing feeling to be able to walk everywhere without face masks, eat dinner with friends in an open restaurant, without worrying about returning home early. Here everything is… normal and I think that’s what I like the most and that’s what surprised me the most. You’ve been with us for a while now and you know that we have lived in our van for years and you can guess that what we value the most in the world is freedom. The pandemic took a bit away from us, because although we live outside the system, we unfortunately have to be in contact with it and somehow all the restrictions affected us. The thing is, here in Sweden there aro no restrictions at all and you can breathe again! I have already spoken to many Swedes and foreigners living in Sweden permanently who told me that here the government, instead of introducing bans or restrictions, recommended certain behaviors – distance, masks in shops and crowded places, not going out and Swedes just followed those recommendations. Here, there is no need to introduce prohibitions, orders or terror – it’s just enough if you ask nicely. 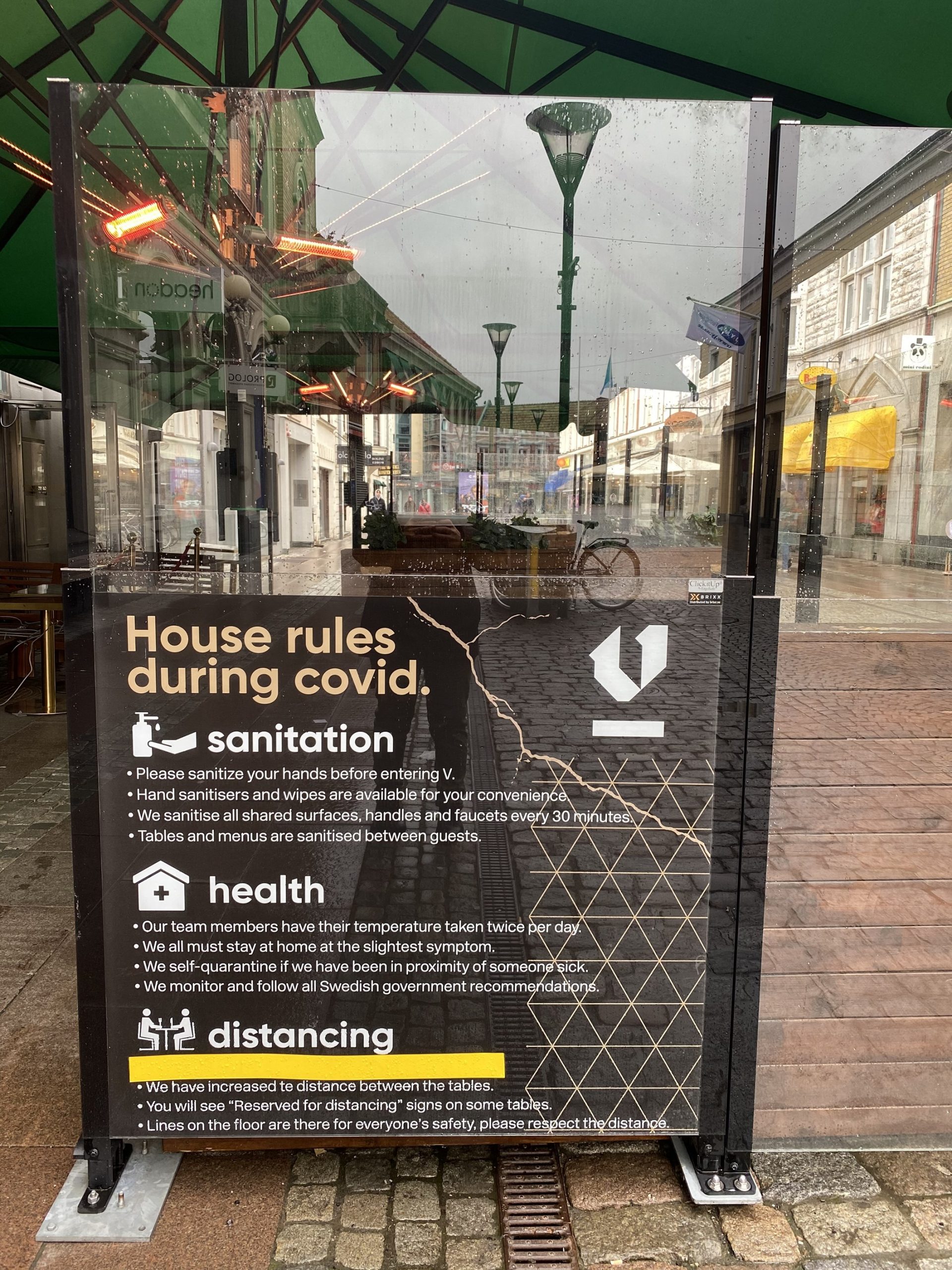 I’d heard earlier that the Swedes are quite serious and keep their distance. It turned out that I couldn’t be more wrong! They seem to be open-minded and, above all, very helpful. They are disciplined and you can see that even on the sidewalks – they all walk on the right side. Before coming, I also heard that Swedes drink little and that alcohol is unwelcome and socially stigmatized. However, there are many Swedes who, like the rest of Europe, enjoy a glass of cold beer or a glass of wine after work (less often). Drinking in public places is forbidden, and yet I have seen many people sitting on the grass with their beers in the park by the river. The Swedes also give the impression of being very well mannered, everyone smiles at each other and, most of all, they greet each other. In the supermarket, every employee said good morning to me today – the cashier, shelf filler, the cleaning lady. 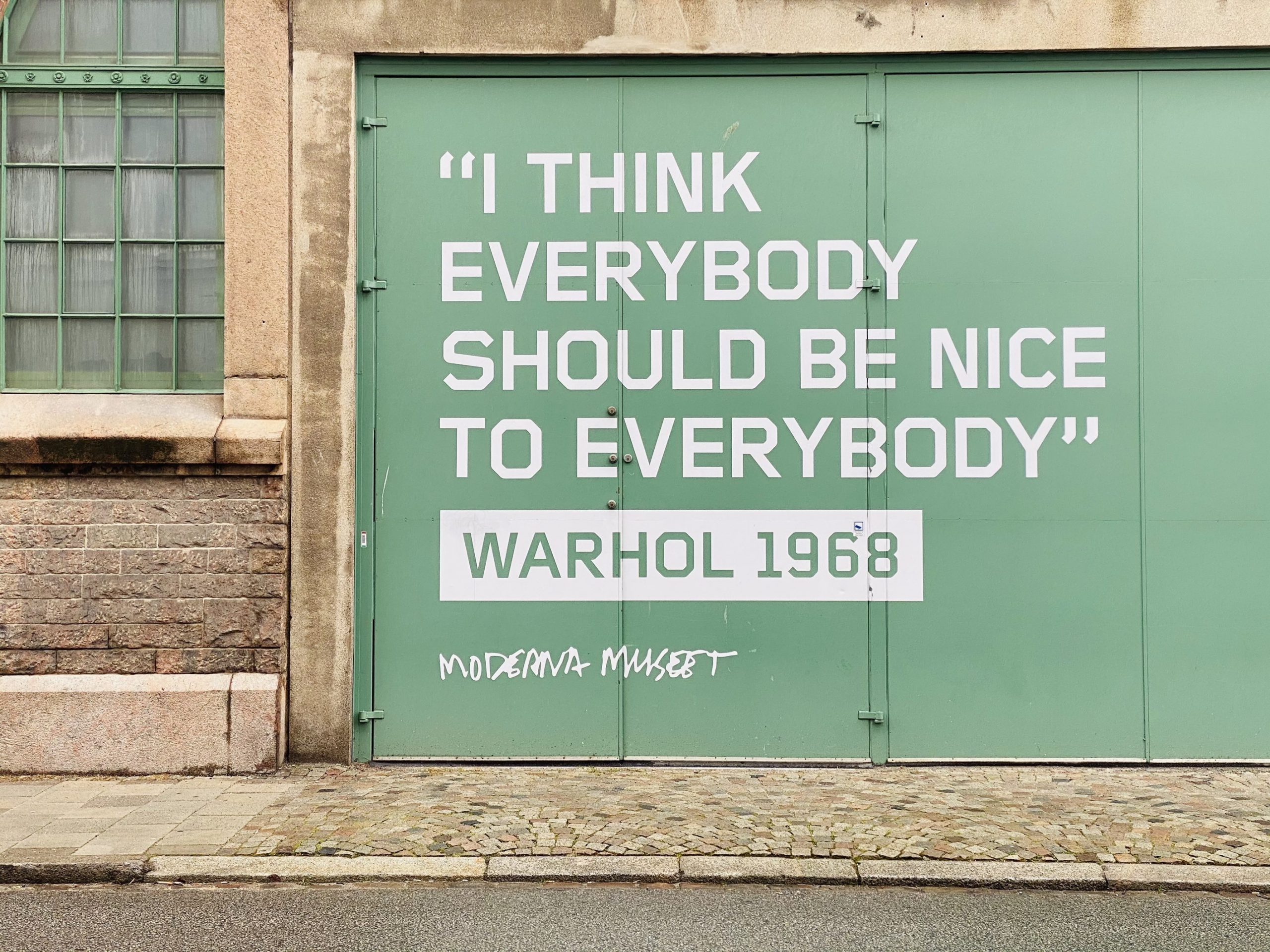 A BIT OF TECHNOLOGY?

I must admit that there are a few small details that surprised me and I do not know how to name this category because these are not entirely technical or technological innovations. For example, yesterday I couldn’t pay at the self-service checkout, and then I had a problem with leaving the store (because the gate would open only after scanning the barcode from the receipt – I obviously thought it was automatic and I walked straight into the closed door). It is also very strange that if you want to pay by card, we put it in the POS at the beginning of shopping, not at the end like everywhere else! Later, when all your products have been checked out, the cashier types in the amount and you have to accept it. Besides, there are very few places where you can pay in cash. In Spain or France, it has recently also been quite complicated to pay with cash but due to COVID. In Sweden, it seems that paper money has been considered obsolete for a long time. Even EUR 0.50 for washing powder at the hotel reception desk, I had to pay by card.

I’ve only been in Malmö for two days, but I can already say that Sweden seems to be a huge IKEA. They attach great importance to design here. Everything is just nice, tidy and in order. Balconies, terraces and gardens look like they were taken straight out from modern magazines. There is no litter or dog poop on the streets. I saw a children’s corner in the church! We return the books to the library, leaving them in a designated place, in front of the entrance to the building! I cannot imagine such a solution in any other country in which I’ve lived. The local society seems to be just two steps ahead of the rest.

I can finally eat a normal hotel breakfast! You don’t even know how happy I am to eat herring in a mustard sauce instead of a chocolate croissant! Instead of a terrible, air-inflated baguette, dark homemade bread. I’m tired of these sweet breakfasts, which are standard in hotels in France, Italy, and even Greece.

Swedes can certainly boast of a very high environmental awareness. I am not talking about waste segregation, but about many other aspects of everyday life. Even the goods in stores show that ecological and natural things are valued here. I have not had the opportunity to go outside Malmö yet, but I am sure that I will be delighted with the local landscapes. It is a big country, and relatively few people live here (the same as in Portugal, which is four times smaller) and that is why we have so much wild, unspoiled nature here. However, I will write about this in the future, today I would only like to mention Malmö – it’s a small city but a very green one with a lot of city parks, and above all – a lot of wild animals! It’s been a long time since I have seen so many different species of birds, not to mention how used thy are to people and just come to say hi. Ducks are walking on the sidewalks and rabbits are running across the streets.

Sweden is a smoke-free zone. It is forbidden to smoke in public places, in bars or restaurants, you can only smoke in specially designated places. Cigarettes and tobacco are relatively expensive products, and Swedes addicted to nicotine reach for snus, a tobacco-based stimulant, which is certainly more elegant than cigarettes – first of all, we do not produce smoke and our hair or clothes do not stink. Snus is a mixture of moist tobacco with other ingredients, we place it under the upper lip. It does not significantly increase salivation, so it does not provoke excessive spitting, and we do not have to chew it. Snus is illegal in all European Union countries except Sweden, Estonia, Hungary, Denmark, Norway and Switzerland. In a Swedish bar, you will sooner see a small, round box on a table than a packet of cigarettes. I haven’t tried it yet, but I have plans and I will share my impressions for sure.