Is “wild camping” legal in Spain?

We have been living in a van for 4.5 years, mainly in Spain (including 1.5 years on Tenerife – Canary Islands) and Portugal. Today we want to share with you our experience in the field of “wild camping” because probably many people plan to visit Spain in an RV or a van and no one wants to be woken up by the police in the middle of the night with a ticket in their hand. We personally haven’t had any problems with the so-called “wild camping” and that’s how we’ve parked over 99.5% of the time. I noticed that the topic has become popular recently, I suspect that also due to COVID, that’s why I decided to explain to you exactly what is allowed and what is not allowed according to the law.

The answer to the question is – no, it is not legal. Wild camping is not allowed in Spain. However, we must realize the difference between parking and camping. Well, it is illegal to park in any wild, non-camping place and take out the awning, table, chairs or even open the windows (as long as they are not sliding) because that would already be called camping. However, if we park our car and spend the night in it (and it does not matter if it is a regular car, an RV or a van) – nothing will happen because we have the right to do so, as long as we are staying in a place where parking is allowed. 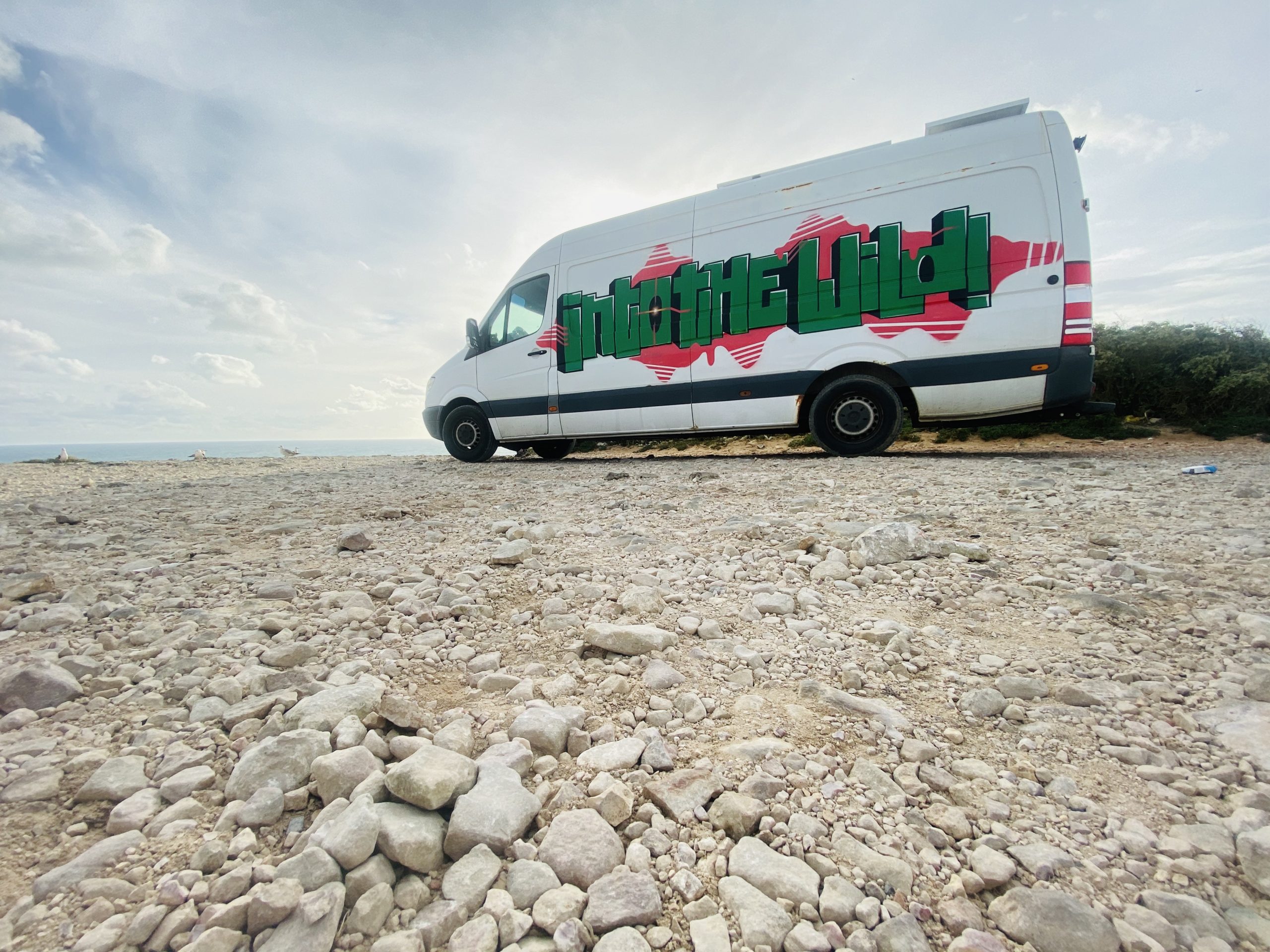 Let me remind you that Spain is divided into autonomous communities. There are 17 of them and each has its own regulations. Therefore, there has always been a problem because on the one hand, the state, through the Ministry of the Interior and DGT (Dirección General de Tráfico – literal translation, Directorate General for Traffic) has power over road traffic, and on the other, the autonomous communities can establish their own laws, regulations and restrictions, also in terms of road traffic.

In order to avoid problems resulting from misinterpretation of the law, in 2008 the Ministry of the Interior approved the Instruction / Directive 08 / V-74 DGT (after clicking on the name you will be redirected to full text in original, in Spanish). We will find there a lot of important information about campers, but most of all we will read the difference between parking and camping. By knowing and understanding the differences, you will easily avoid potential problems and sanctions. 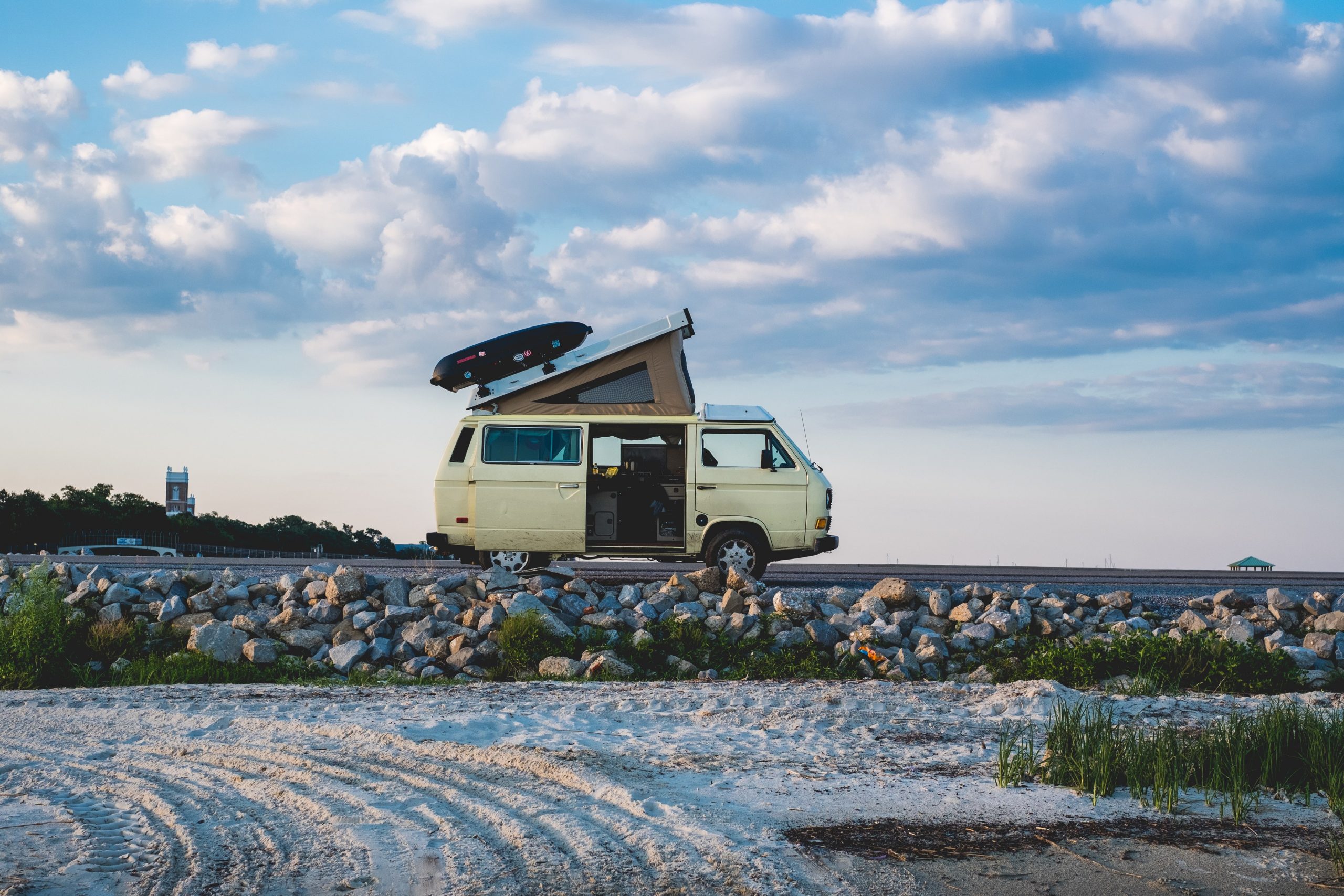 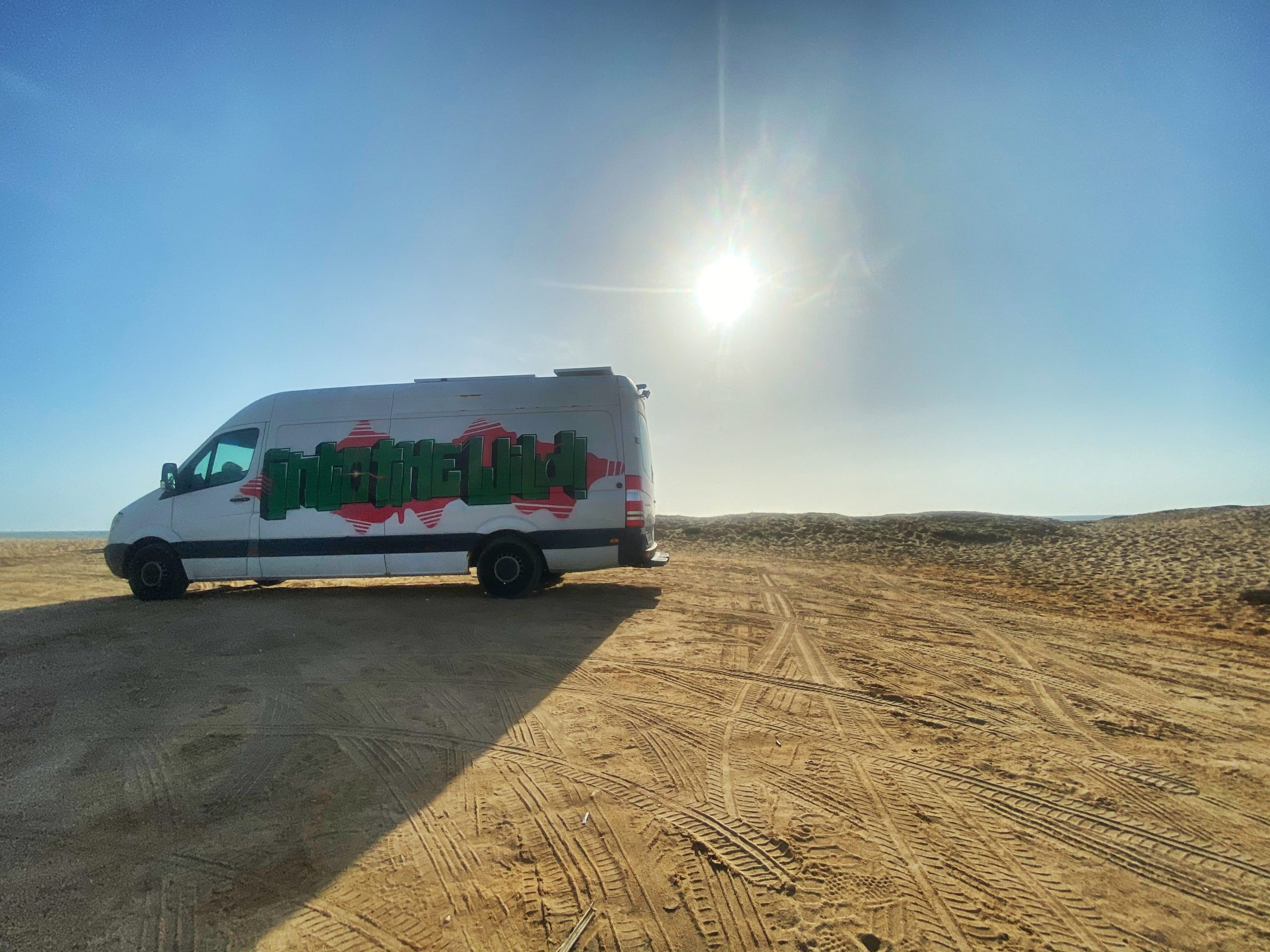 If they are following those rules, the passengers of the motorhome can sleep inside, even lift the roof or open the roof window, bearing in mind, however, that no element can protrude beyond the perimeter of the vehicle. 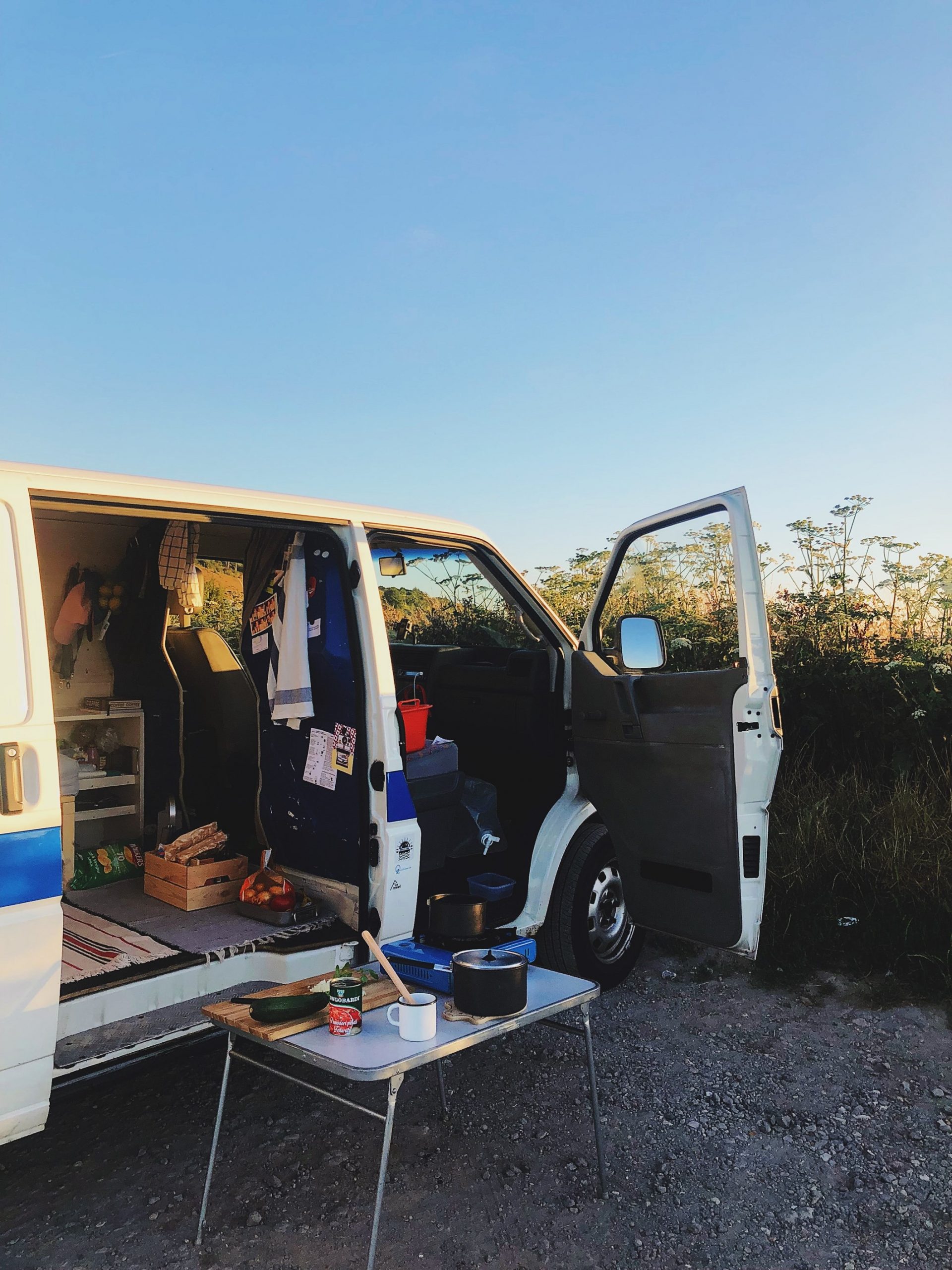 When a car is considered not parked but camped (acampado):

In this case, the motorhome is considered “camping” and therefore authorities may ask its residents to go to a camping site.

I must also mention article 46.1 of the ordinance of July 28, 1996, which precisely defines what an illegal camping is, not only in relation to motorhomes but also tents

This means that if the vehicle is well parked, under no circumstances can we be fined for illegal camping or improper parking.

For a long time, all users of four-wheeled houses were happy until the new law was introduced, Article 93 of the Real Decreto General Road Traffic Regulations 1428/2003 of November 21 which states that

“1. The rules for stopping and parking on city roads will be regulated in the municipal regulation. “

Fortunately, this has some limitations:

“Under no circumstances may municipal ordinances contradict (…) general provisions”

Well, we know that in a place where parking is not prohibited, we can always spend the night inside our car, if we only park and not camp. However, another issue is finding such a place. It is obvious that we must comply with road traffic regulations, and the article mentioned in the above paragraph says that municipalities have the right to introduce various types of restrictions and limits, as long as they do not conflict with generally applicable law. Unfortunately, sometimes they break the law! Let’s see some examples: 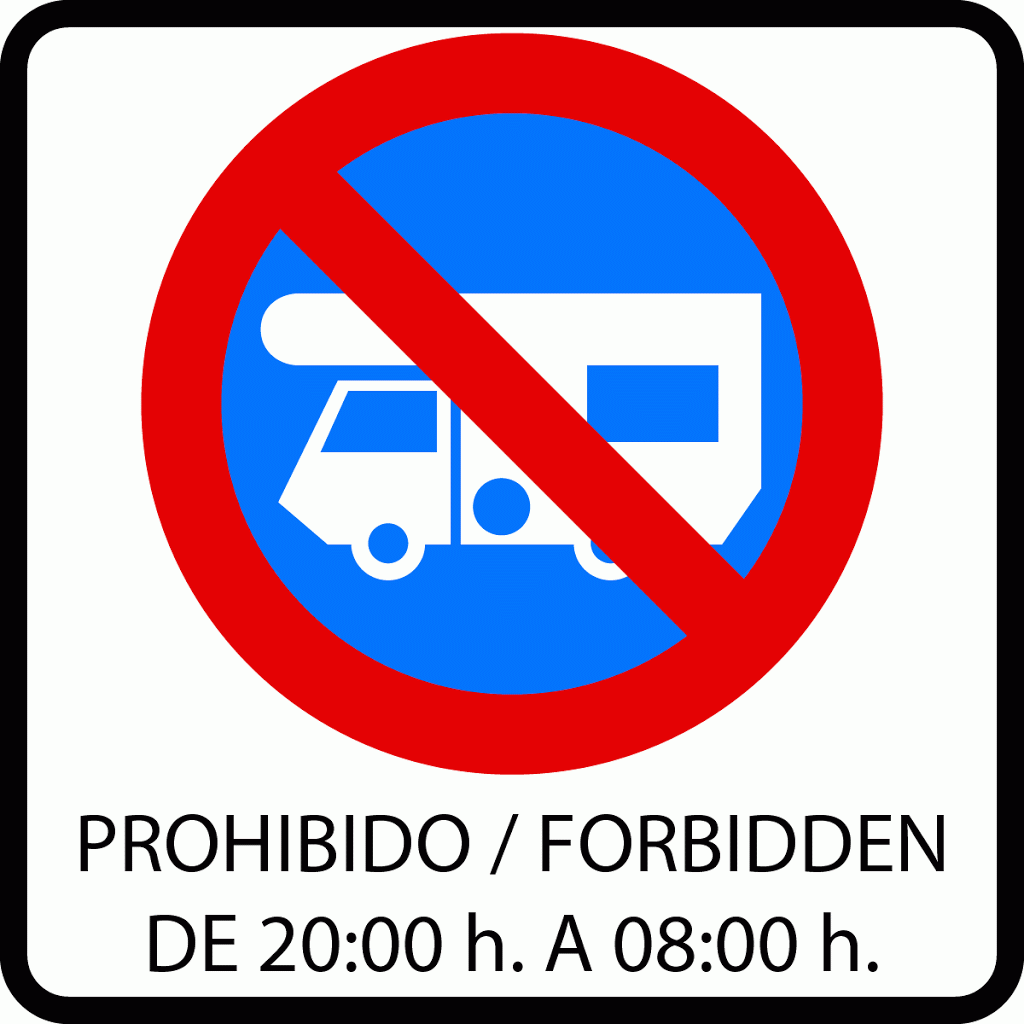 This sign is illegal (as is the variant with a time restriction (for example from 8:00 p.m. to 8:00 a.m.) that allows parking during the day but not at night), and you can still find it in many places. Why is it against the law? Even if the city council has placed such a sign and a city ordinance was issued according to instruction 08 / V-74 of the General Directorate of Traffic:

“… In the opinion of the General Directorate of Traffic, it is undisputed that the exclusion of certain public road users must necessarily be justified and based on objective reasons, such as the external dimensions of the vehicle or its maximum permissible weight, and not by its construction or criteria for use, or for subjective reasons. . And concludes:

“As a result, motorhomes can perform stopping and parking maneuvers under the same conditions and with the same restrictions as any other vehicle.”

The point is, of course, that, under the abovementioned directive, any sign which concerns only motorhomes (but not other vehicles with similar dimensions but with a different function) is discriminatory. It is like prohibiting the entry or parking of green cars or a specific brand.

If you do get a ticket, you can appeal. To appeal, please cite article 93 of the General Road Traffic Regulations and manual 08 / V-74, in particular the parts I cited earlier. Of course, I do not want to guarantee anyone a win, but in this particular case the law is on our side. 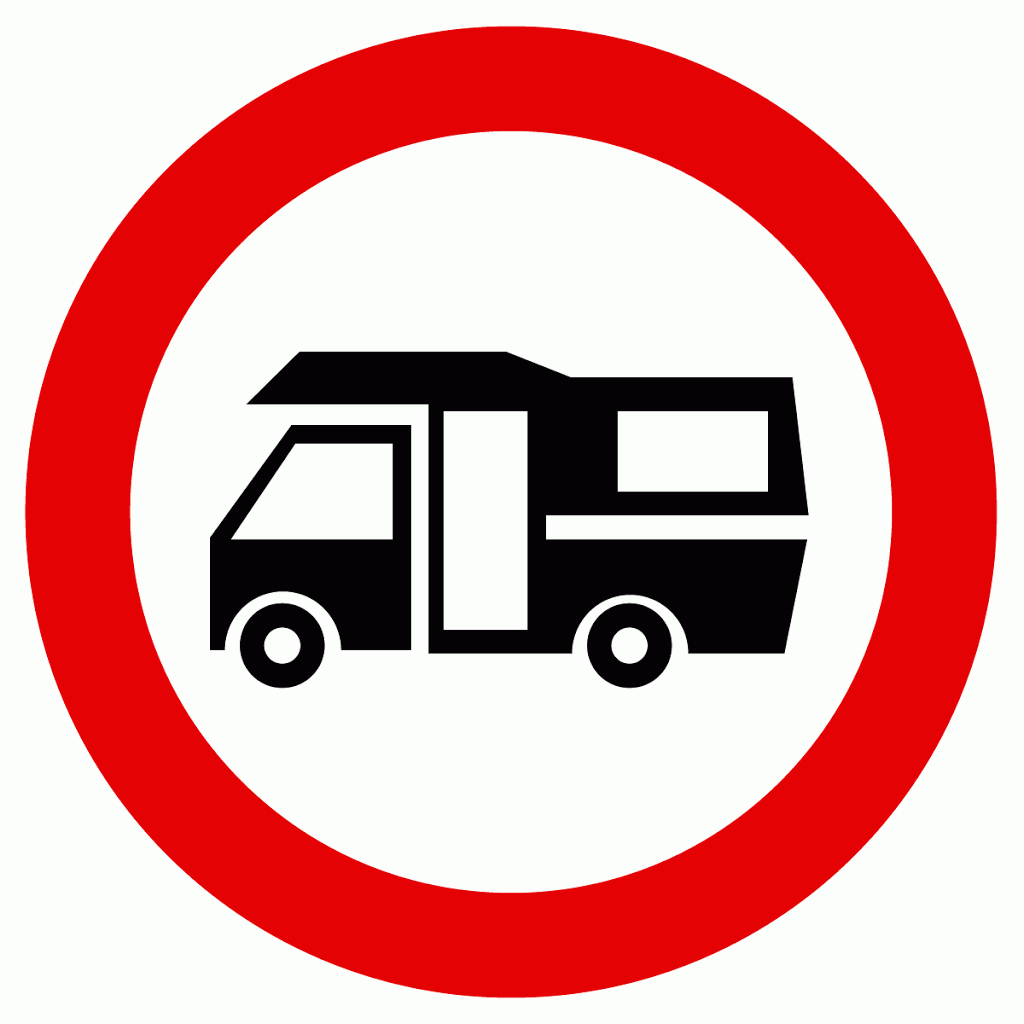 This sign also contradicts the rules of the road for the same reasons as the previous one. There are several municipalities that have this sign installed at the entrance to the municipality, we have the right to complain to the Ombudsman on grounds of discrimination. 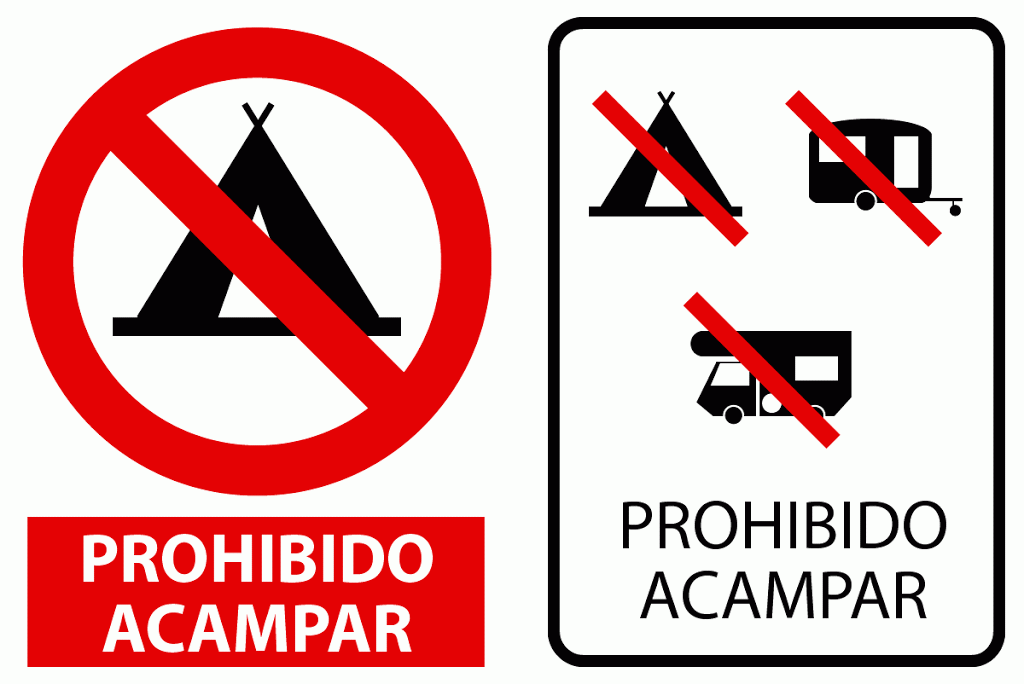 The first sign is completely legal and prohibits camping. Actually, it reminds us that camping is prohibited because you already know that, according to Spanish law, camping is completely illegal in places not intended for this (“in the wild”).

The second sign is misleading as it suggests that the presence of a motorhome or caravan is generally prohibited. According to the road traffic regulations, it may be forbidden to camp in a motorhome, caravan or van, but not to park it.

Info about signs comes from: https://lafurgoteta.com/leyes-antiautocaravanas-de-los-ayuntamientos/

The regulations seem quite clear and so far (and let me remind you – we have lived permanently in the van for almost five years and spent this time mainly parking in the wild and met hundreds of people traveling this way) we have not had any problems with the police. However, if ever experience any problems, even though you’ve followed all of the above-mentioned rules:

When it comes to caravans, to be parked they must be attached to the vehicle which means you cannot sleep inside. We can sleep when the trailer is detached and placed on stabilizer legs. The towing hooks are not intended for this purpose.

Sometimes, of course, we can hit upon an extremely stubborn policeman, and here is our advice, very subjective – it is better to give in and go to another place, if possible. We personally do not come into conflict with anyone, and certainly not with representatives of the law. We had several inspections, but the officers we have met so far were very nice and we didn’t have and we don’t have reasons to argue.

Finally, I would like to draw your attention to the coastal law in force – a few words about spending the night in a motorhome by the sea. To the already quite vague and complicated legal situation, we must add the “Law 22/1988 of 28 July on Coasts”, which is primarily aimed at ensuring public use of the sea shore and protection of the environment. The law was, in a way, a response to the boom in the Spanish coastal real estate market in the 1980s. Back then, motorhomes were not as common as they are today, so the act itself does not contain a word about them. Unfortunately, also “Law 2/2013 of May 29 on the protection and sustainable development of the coastline and the amendment to the law on coastal areas” does not contain any references or explanations regarding our vehicles, which leaves us no choice. Interpret the regulations and contact competent authorities if their interpretation differs from ours. I will not dwell too much on these two laws, but I wanted the article to be as complete as possible, so I mention that such laws exist and regulate the coastal zone.

Generally, the information that we already know in a nutshell is repeated – camping is forbidden in the coastal zone (similarly, as you already know, almost everywhere) – the difference is that on the coasts we often deal with other services than the police or the civil guard eg environmental protection (Spanish: medio ambiente), who sometimes cannot understand that there is a difference between parking and camping. They are also more willing to fine. Unfortunately, this is also due to the fact that large areas on the coast are protected areas and in many places it is simply forbidden to enter, park or stay overnight – and we are talking about a ban that applies to all vehicles or those of a certain weight or shape, not just motorhomes, so we cannot claim discrimination. So remember that, for example, in most parts of the Cabo de Gata, we will not be able to spend the night “legally”.

You should also remember that the van is not a motorhome and is treated differently by the police (I know it because I consulted many policemen) and it is easier to park it anywhere without arousing negative emotions and attracting the attention of the authorities.

Second thing – all that I wrote above are applicable laws. This does not mean that if you pull out a table by the beach, you will get a ticket. So far in Spain they turned a blind eye to camping in many places – once again I would like to remind you that we have been standing in many places for almost 5 years, often camping in large groups for more than 3 days with all the “equipment” out and never anything happened. However, we did so with the awareness that we might be punished or asked to re-park or stop camping. If that ever had happened, we would have complied with the admonition right away because, as I mentioned earlier, we are not looking for conflicts.

Remember also that due to the current “pandemic” situation, the authorities may be a little less indulgent with campers on foreign plates that do not follow the recommendations and are more willing to admonish or give tickets. I know this is what happened last year in Portugal, where suddenly the police started to fine hundreds of campervans in places where in previous years no one had ever checked anything. This article is informative, so that you are aware of the applicable law – whether you comply with it is your choice.

Photos, in which our beautiful Into The Wild graffiti van is not visible, were downloaded from the