Our Moroccan adventure turned out to be completely different than we expected. Generally, we planned a longer trip to Cuba, but for some personal reasons, this idea didn’t work out and we decided last minute to go to Morocco, mainly due to very cheap flights. How did the country of mint tea, cheap hash and amazing tajines welcome us? Today’s post is full of “private stuff”. You can read about the places we visited – Marrakesh, Chefchaouen and Tangier, and how to prepare a typical Moroccan tajine in the next articles.

Recently I described my one day trip around Bilbao. From there I traveleld east, left the Basque Country behind and for a week now I’ve been in the French New Aquitaine. Because I’m here for work and not just for fun, I don’t really have the opportunity to do any sightseeing. Especially because I ended up in a hotel at the end of the world. Besides, in France, from 6 p.m. to 6 a.m., it is not allowed to be outside and everyone should stay at home, so I spend 12 hours every day practicing yoga, meditating, watching movies and reading books. I am trying to catch up with some things that I have neglected and I am planning our crazy trip, which we are going to pursue at the end of this year. You will definately hear about this trip more than once, but in the meantime I would like to take you to Morocco, where we were in December 2019. I wanted to share our experience earlier but… there was never time to do so.

A visit to North Africa had been on our minds for a long time, and suddenly there were plane tickets available literally for pennies – we paid for two people the return trip from Seville to Marrakesh – 20 EUR! This opportunity was not to be missed and although we usually like to take hit the road with our four-wheeled house, that time we decided to go by plane. We flew rather unprepared, we did not plan any specific attractions, we did not buy any tickets except plane tickets, nor did we book accommodation. We only invested in some electronic equipment so we finally bought a portable solar panel (AUKEY PB-P25 21W, 2 USB 5V 4A ports; spoiler – we have not used it yet!), a few cables and most importantly a new power bank (AUKEY 20000mAh , 4 outputs, 3 inputs; 3A output can charge a USB-C and 3 x USB-A devices simultaneously + micro USB). Our previous one still remembers dirty, Silesian air, and as you know 5 years in terms of technology is like a decade (or more) in any other field. We recommend the power bank itself, a full one allows us to charge two phones twice.

As I’ve mentioned, we did not prepare in any particular way for this trip, the only thing we did was to contact several people via couchsurfing. This way we found Bader, who seemed really nice and promised golden mountains, or in fact he promised just what people usually offer via couchsurfing (which back then was a 100% free platform).

We were supposed to stay with him, but after a few days from our arrival, because he had other guests before. He booked us a room in the center of the Medina in Marrakesh (€ 20 / night). We were supposed to go south in his car and stay with his family, who live next to the desert, near the border with Algeria, in the town of Tangroute. Maybe it was naive of us, but we thought that it would be nice to get to know local customs this way, learn to cook a real tagine and prepare the famous Moroccan mint tea under the starry skies of the Sahara, so we trusted him and did not look for anyone on couchsurfing (which as it turned out later, was a mistake).

We had already used couchsurfing before and we were absolutely sure that this is a website where people offer accommodation, sightseeing or company for FREE. How wrong we were…! We landed in Marrakesh where we were picked up by our host’s driver. It turned out that his home was literally two minutes from the airport. Of course, we were greeted by Bader, dressed in traditional clothes and a turban. He made a really nice impression, he prepared a tajine and a traditional mint tea for us, gave us some useful advice on how to survive in Marrakesh and started talking about our trip to the desert. Unfortunately it was not what we had expected. We generally live on a low budget in a van as you all know and we spend less in a month than we would spend on a three-day trip to the desert, which he suggested. Do you also think 550 € is a bit too much? Especially if we are talking about something found on couchsurfing …

After lunch the driver took us to the hostel – nothing fancy but there was a bathroom in the room and clean sheets. Marrakech turned out to be noisy, dirty and just overwhelming, so by around 1:00 am we were already asleep. The next day we returned to our “almost” couchsurfing host to see how the famous Moroccan tajine is cooked (we will share the recipe soon). It was a very nice experience for us and Bader also made a good impression, he really is a friendly and likeable guy but unfortunately he tried too hard to sell us something.

I believe that a private 3-day guided trip to the Sahara desert, where you have the chance to see local life, customs, traditions, and stay with a real Berber family is worth 550 €, but unfortunately we didn’t plan to explore Morocco that way. We wanted, as always when we used couchsurifng, to hang out with some local people, crash on their couch, cook together, do some shopping and sightseeing together, have a beer. It turned out that it is a bit different in Morocco. Unfortuantely you will find many people on couchsurfing trying to earn on the “rich tourists from the western Europe”, which we also saw few times later on (although we also found some really nice people). We really wanted to see more in Morocco, so we started considering other options, such as renting a car.

Ryanair sent us an email offering an inexpensive car for only € 45 per week. Our “host” said that if we rented a car, we could meet him in his hometown of Tangroute and from there organize some amazing days in the desert for only € 200 (which seemed a little better option for us). Unfortunately, when we finally bought a SIM card in Orange and were able to use the internet, we read that apart from paying 45 € you have to leave a deposit of 1200 €. A walk through ALL the airport rentals made us sure that renting a car is not that easy in Morocco. At least not at the airport. Of course there are hundreds of noname companies offering cars for even less than 45 € (mostly in the Medina area) with very little or no deposit, with or without papers, with or without insurance etc. but we were a bit afraid to take the risk. Then we met people who had rented a car for really ridiculous money, without a contract, and they were very happy. The decision is yours, but for this it is probably too risky play.

When the idea of renting a car died, we both had a slight nervous breakdown. We felt a bit cheated, disappointed and lost. Because of all the shit we had been going through before, I think we really hoped for a nice, stress-free holiday – a real reboot and a beautiful start into the new year. JJ was already hunting home tickets back home and I read thousands of articles to find any inspiration on what to do next. We decided that we were temporarily forgetting our trip to the Sahara desert, we drank too much coffee, went to the train station where we bought a map, sat down at McDonald’s with the map on the table, and started to “think”. 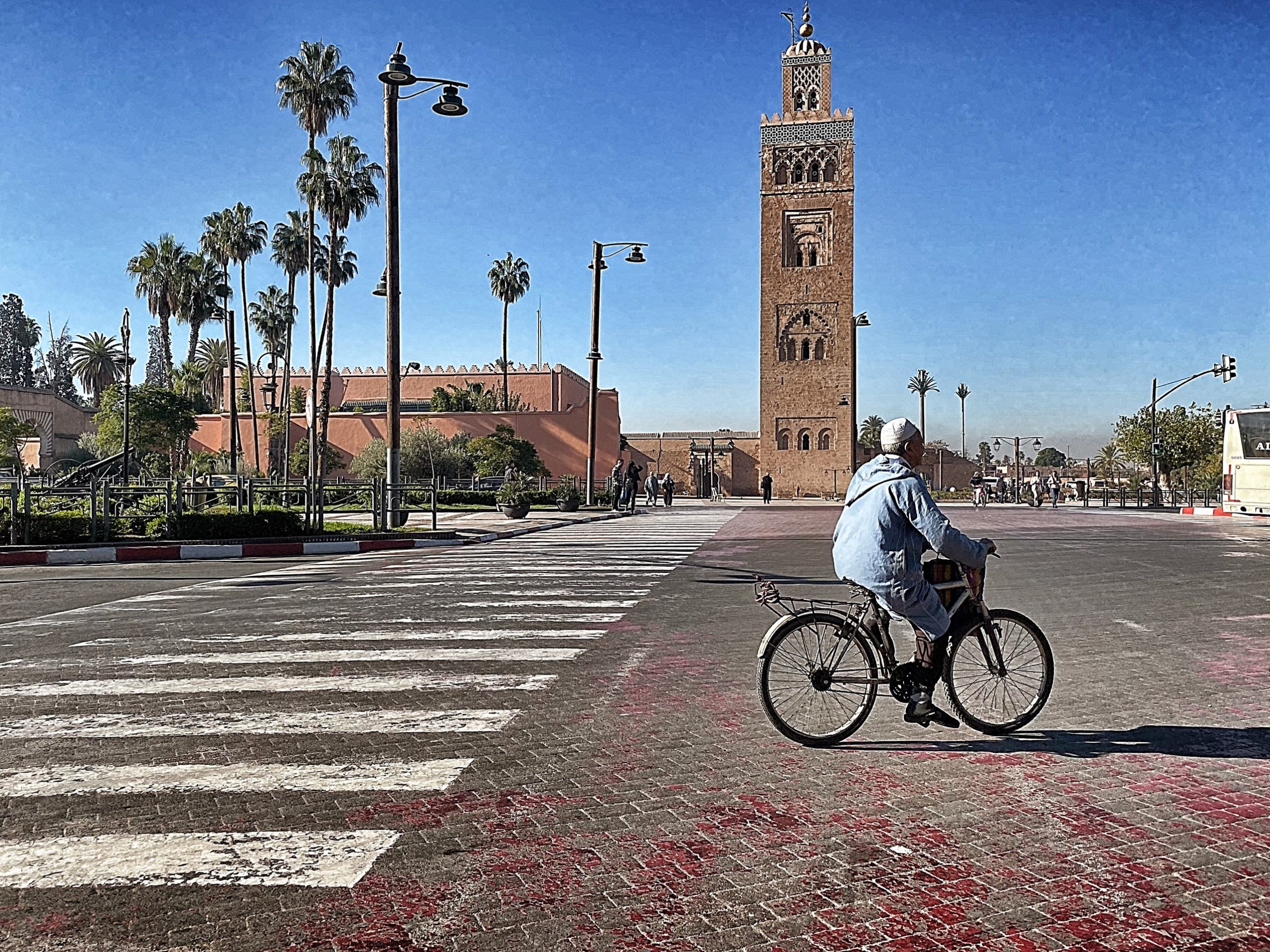 Fortunately, I found a few more people on couchsurfing, with whom we met the following day (we spent the night in the same hostel). Not all of them were from Morocco, so as tourists we exchanged our insights and experiences, we walked up and down the center of Marrakech and finally felt that the pressure built up over the previous months was going away. Liters of mint tea and fresh fruit juices, local street food, snake charmers, the smell of spices, multicolored costumes, thousands of people, live music coming from every part of Jamaa el Fna (Djemaa-el-Fna) square, fakirs and fire eaters – it all slowly absorbed us and we got carried away.

We met one really interesting guy who told us how hard it is to be an atheist in Morocco (we remind you that officially 99.9% of the population in Morocco is muslim) and he took us to a very tasty dinner, for which we paid about 4.5€ for 3 people, including drinks.

It was he who encouraged us to go north and took us to one of the few places where the local people drink beer. At the end of the day, he took us to the bus station where he put us on the right bus that took us straight to Fes (it took all night). From there we had another bus to Chefchaouen. If you want to read about the blue city, don’t forget to follow us, so you don’t miss the article from the next stage of our short trip to Morocco.